These slow cooker shredded beef tacos are about to make “Taco Tuesday” your favorite night of the week. Not only is the process super simple but you can find a reason to make them time and time again!

Tacos are probably the best food that has ever been invented. Not only are they incredibly versatile, but the flavors you can taste in one single taco are absolutely amazing!

Ever since I have figured out how to make tacos in the slow cooker, it really has been a huge game-changer for me. There isn’t much that you have to really worry about since your slow cooker takes over and does all the work for you. All you have to do is dump and go- it’s the best!

Especially when you can come home to dinner just ready and waiting…that’s a perfect ending to any great day.

It’s time to take charge of “Taco Tuesday” and whip up these shredded beef tacos in the slow cooker. I think after just one taco you’re going to be convinced!

Watch this quick video and learn how to put these yummy slow cooker tacos together.

Before I share my slow cooker shredded beef recipe, here are a few questions I have gotten from our readers that I wanted to share:

What Cut Of Beef Is Best For Shredding?

For this specific recipe, I decided to go with a chuck roast. It’s readily available, it’s not expensive, and the beef comes out fork-tender when I cook it. A chuck roast has a lot of marbling through the meat so it falls apart when it’s cooked low and slow.

If you are not able to find a chuck roast, then I would recommend a beef brisket next. If it’s cooked at a low, consistent temperature in a slow cooker, it will completely fall apart and hold lots of flavors.

What Is The Difference Between Shredded Beef and Carnitas?

The biggest difference between shredded beef and carnitas would have to be they are two very different cuts of meat (actually, they are both from two different animals.

Carnitas are actually made from pork, specifically pork butt and it has a whole other flavor profile!

Break out the tortillas! It’s time to start cooking up the shredded beef.

All you need are a few simple ingredients to make this recipe. I can assure you that once you cook it just one time, it’s going to be a family favorite that is requested over and over again.

How To Make Shredded Beef For Tacos

In a 5-quart slow-cooker, add the chuck roast and smear the minced garlic over the top. Then, add the lime juice, chili powder, cumin, oregano, salt and pepper to season the meat.

Pour over the chicken broth and add the chopped onion. 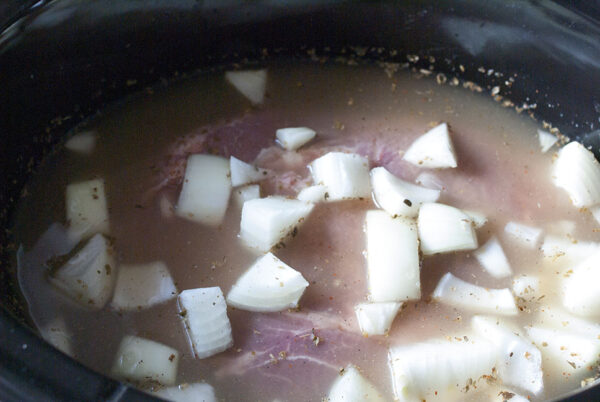 Cover and let cook on LOW for 8 hours.

Cooking Tip: Make sure to keep an eye on it during the last few hours. Depending on the size of the meat, adjust the amount of time left in the slow cooker so it doesn’t overcook.

Once it’s cooked through, remove the roast and place on cutting board or in a bowl. Remove any cooked fatty parts that have been leftover and shred the beef with two forks. 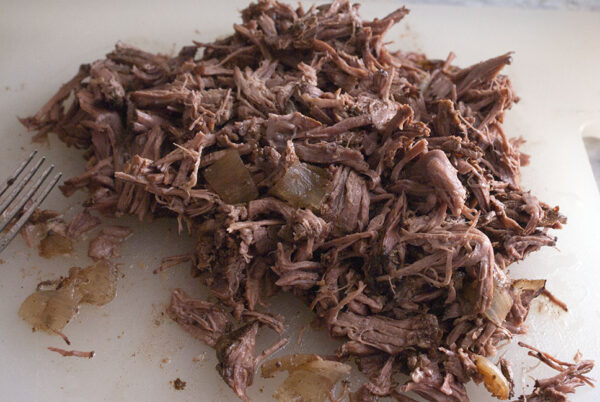 Pour over enough juice so it’s nicely marinated, which would be just about a cup or less.

Just wait until you try this recipe, it’s so good!

What To Serve With Shredded Beef Tacos

To serve up these shredded beef tacos, I usually use a corn or flour tortilla to start.

For the toppings, I love to use:

Best. Taco. EVER! To make it even better, I make some homemade Spanish rice and black beans to serve on the side. So yummy! 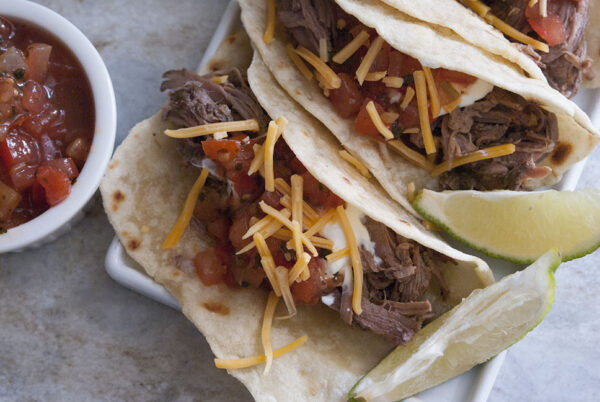 But, I totally understand if you are not in the mood for tacos. So, you can also use shredded beef to make your own nachos! I still use all of the same toppings with some tortillas chip. The only thing I switch out is the shredded cheese.

When I make nachos, I always make my slow cooker queso dip. It’s so rich and delicious. And, it only takes 3 ingredients to make. It doesn’t get any easier than that!

If you loved this Slow Cooker Shredded Beef Tacos Crockpot recipe, check out some of our best recipes from The Slow Cooking Club:

In a 5-quart slow-cooker, add chuck roast and smear garlic over top. Then add lime juice, chili powder, cumin, and oregano, salt & pepper, then pour over chicken broth and add the onion. Cover and let cook on low, for 8 hours.

Once done, remove roast and place on cutting board or in a bowl. Remove any cook fatty parts and shred with forks. Pour over enough juice so it's nicely marinated, which would be just about a cup or less.

Char tortillas over the flame of a gas burner or in the oven, then top with beef and serve with your favorite toppings. Squeeze lime juice over the tacos before serving as it helps to bring the flavors alive. 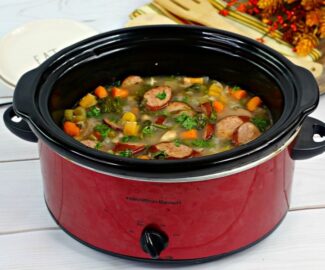 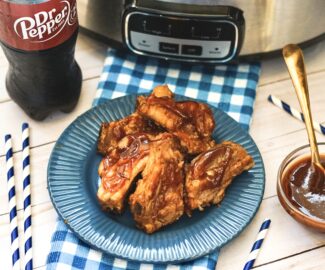 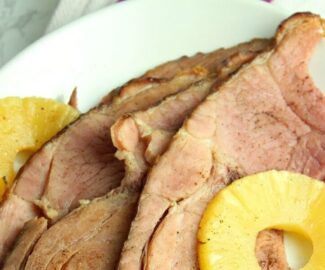 We love making mealtime as simple as possible. So when we discovered a plan that makes dinner time a breeze we had to gush about it. Imagine your monthly meal plan mapped out for you! We love The Lazy Day Cooking Club!
Previous Post Crockpot Corn Chowder
Next Post Slow Cooker Pulled Pork