This crockpot chicken bruschetta turns your favorite Italian appetizer into a whole dinner meal! With just 10 simple ingredients and very minimal prep work, you can have this chicken bruschetta recipe ready to serve with a delicious side of pasta in just under 4 hours.

I don’t know about you but I’ve always made fresh bruschetta at home and served it on top of a freshly sliced baguette.

When I found out you can essentially make bruschetta but on top of a chicken breast, my first reaction was, “That’s a thing?” Immediately right after, I was like “Sign. Me. Up!”

How have I been missing out on this chicken dish for so long? This chicken bruschetta recipe is incredibly moist has a bunch of robust flavors coming from the diced tomatoes and basil. There’s even this creamy, melty texture from the mozzarella cheese that just makes you go YUM!

I even added a secret ingredient in this dish: stuffing mix.

I know! It sounds a little weird but, trust me, it really ties the entire chicken dish together.

Video: How to Make Chicken Bruschetta

Ready for your mouth to start watering? Check out this video showing how to make chicken bruschetta.

Before I share my crockpot chicken bruschetta recipe, here are a few questions I have gotten from our readers that I wanted to share:

Can I Use Chicken Thighs Instead Of Chicken Breast?

Yes, you can! It’s a very easy swap and you don’t really have to make any adjusts to the recipe. Just make sure to keep an eye on the time!

How Will I Know If The Chicken Is Ready?

You can always periodically check on the chicken to make sure it’s not overcooked or raw in the middle. To do this, I typically use my meat thermometer.

Can I Use Fresh Mozzarella Instead of Shredded Cheese?

You can… But, I wouldn’t recommend it. When you use pieces of fresh whole mozzarella in this chicken dish, it can become very stringy, hard to serve, and it just won’t really melt very well.

Now for my favorite part of the day- prepping the recipe!

Here are the ingredients you will need to make this chicken bruschetta recipe:

How To Make Chicken Brushetta

Before you start adding any ingredients to the slow cooker, make sure to clean up the chicken breasts and remove any fat.

Once the chicken is done, shred the chicken breasts using two forks or you can use these meat shredder claws (AMAZON LINK) that I also used to shred pulled pork!

Add the shredded chicken back into the crockpot.

Sprinkle the cheese evenly over the top of shredded chicken and follow that with a layer of the stuffing mixture.

Cook on HIGH for an additional 30 minutes.

If you want to make the stuffing mixture a bit crispy, scoop out the chicken and place everything in a baking dish and stick it under a broiler for about 5-6 minutes.

What To Serve With Chicken Bruschetta

My favorite way to serve up this chicken dish is with a nice bowl of spaghetti tossed with a little bit of olive oil, salt, and pepper.

If you’ve never tried chicken bruschetta with pasta, you are really missing out. It’s absolutely delicious!

As a low carb option, you can replace the spaghetti with some low carb zucchini noodles and it’s just as yummy.

If you are looking for another side dish to serve with this chicken recipe, here are a couple of my other favorite go-to’s:

If you loved this Crockpot Chicken Bruschetta recipe, check out some of our best recipes from The Slow Cooking Club: 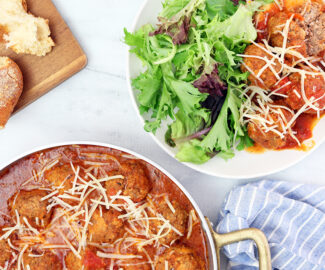 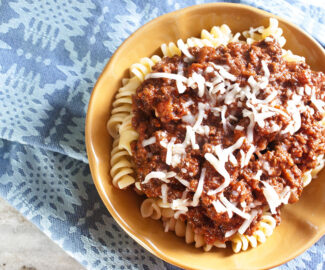 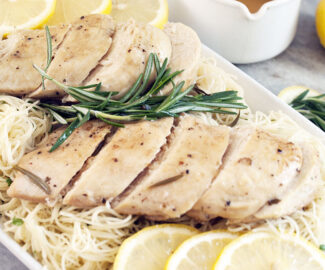 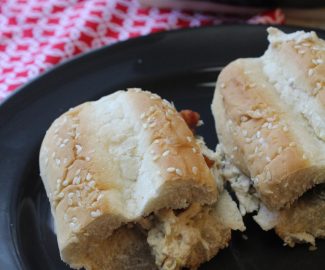 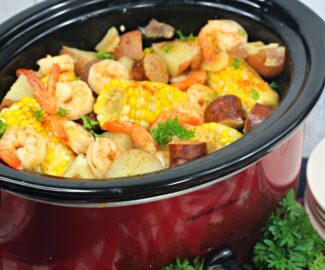 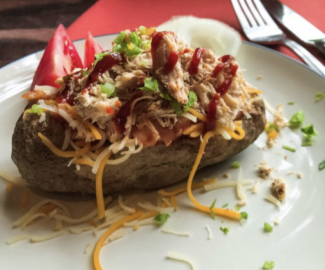 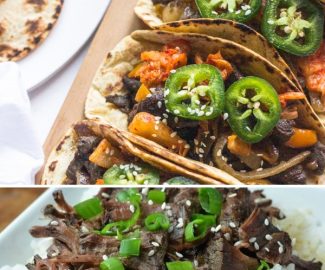 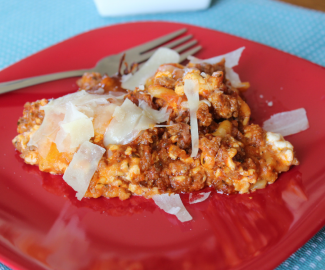 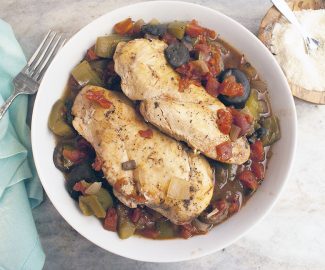 We love making mealtime as simple as possible. So when we discovered a plan that makes dinner time a breeze we had to gush about it. Imagine your monthly meal plan mapped out for you! We love The Lazy Day Cooking Club!
Previous Post Crockpot Brownies With Peanut Butter Chips
Next Post Slow Cooker Homemade Playdough